Our tour starts from Jvari Monastery ancient temple dates back to the 6th century AD nearby the ancient capital of Georgia, Mtskheta, on the top of a high mountain, from where picturesque views of the neighborhood open, at the intersection of stormy waters of the Aragvi and Kura rivers. The temple attracts thousands of tourists because of its architecture, location and historical value. The name of the church is translated from Georgian as “the cross” and has its own history wich we will tell you there.

Our next stop is the ancient capital of Georgia - Mtskheta a museum city which is as a Jvari Monastery also is UNESCO World Heritage Site. It has been inhabited since 2500 years ago and was once the capital of the early Kingdom of Iberia. In this oldest town is located many ancient historical monumets as Pompey Bridge a stone bridge over the Kura River built in the time of Pompey the Great about 65 BC , Bebris Castle of 1st century and one of the most sacred place Svetitskhoveli Cathedral the main Christian Orthodox Cathedral, where Christ’s robe is said to be buried.

The chronicles of Georgia is huge stone monument that go by the different names , often called "Georgian Stonehenge" or "Georgian History Memorial" , monument depicts scenes from the 3,000-year history of Georgia and was designed and created by Zurab Tserteli, consists of 16 large columns that reach a height of around 35 meters each. The lower parts portray the life of Jesus and other notable figures throughout the history of Christianity. The higher parts of the pillars contain notable members of royalty and rulers of Georgia.

We will continue our tour to old part of Tbilisi ,we will stop the car and discover the city by walking , during walking you will visit fallowing places : - Tbilisi sulphur pools - Bridge of Love - Waterfall - Meidan Bazar Tunnel - Gorgasali Monument - Tbilisi Fortress - Mother of Georgia - Rike Park - Bridge of Peace - Shardeni Street - Clock Tower of Revaz Gabriadze After visiting all the places we'll go back to the car and continue our tour by discovering new places by car : - Freedom square - Rustaveli avenue - Hero square - Agmashenebeli Avenue

Of course we will not leave the most important during our tour and will visit Sameba Cathedral - the Holy Trinity Tsminda Sameba is also called the symbol of new Georgia. The beauty and sizes of cathedral are indeed breathtaking, and rises magnificently on the hill of the St. Ilya, Sameba is the highest church in Georgia 101m high. Sameba Cathedral was built with grandiose scope. Its golden dome is practically seen from any point in Tbilisi. The cathedral is part of the entire complex including residence of the Patriarch and a monastery, school of theology and academy, hotel and the complex consisting of nine chapels, five of which are located under the ground.

And final destination of our tour top of Mount Mtatsminda overlooking the capitol Tbilisi with big Ferris Wheel at the edge of the mountain offering splendid view over the city.

You will depart from Tbilisi early in the morning, in the direction of Kazbegi 160 km along the Georgian Military Road , our first stop is at Zhinvali an artificial water reservoir located on the river Aragvi , a perfect place for a memorible landscape photography.

Our next stop just after 15 minutes is Ananuri Castle one of Georgia’s most touristy places. It’s a fortress with a pair of churches and an 16th-century defensive tower inside. The fortress complex is located on the shores of the Zhinvali Reservoir, which, by the way, is quite remarkable in its turquoise waters. The Fortress used to be the seat of the eristavis (dukes) of Aragvi. Excellent views, mountains, water, a picturesque fortress – wandering around all this will wait you here.

Next stop on the way is Gudauri , a remarkable ski resort in Georgia. The resort is at the altitude 2200m above the sea level. The last lower lift station is at 3,306m. The resort offers high-quality skiing opportunities. The ski season lasts from December through April.

Gudauri Friendship Monument or Gudauri Panorama one the most beautiful place with amazing views to the Devil's Valley and Caucasus mountains. Monument was built in 1983 during Soviet Union to celebrate the bicentennial of the Treaty of Georgievsk and the ongoing friendship between Soviet Georgia and Soviet Russia. Located on the Georgian Military Highway between the ski resort town of Gudauri and the Jvari pass, the monument is a large round stone and concrete structure , inside the cylinder monument, a vibrantly colored mural depicts heavily stylized scenes from Georgian and Russian histories.

Our last stop is small town near Russian-Georgian border now officially named Stepantsminda, but still commonly known as Kazbegi. Town with wonderful view to one the highest mountain of Georgia , Kazbegi wich is 5047 meters. We will stop in this town for sometime to have lunch or to visit Gergeti trinity church if you would like.

Kakheti is a region of wine, which located to the eastern part of Georgia, where you can enjoy the mountain scenery, picturesque villages, ancient temples and life of the locals. Also you will taste unique Georgian wines and get acquainted with the secrets of winemaking , our first stop will be in “Bodbe Monastery”. Short stop at the Monastery to see Church of St. George where you will find tomb of St. Nino woman who preached Christianity in Georgia 1700 year ago, that resulted from the Christianization of Georgia.. Also from the monastery territory you can see beautiful view of Alazani Valley

We continue way to the beautiful city on the hill “Sighnaghi” (City of Love) prettiest town in Kakheti full of 18th-19th-century architecture. Signagi has wonderful views over the Alazani valley with lovely romantic restaurants and one of the longest walls in Georgia.

Continue to Kvareli town where we will visit Kindzmarauli Corporation Wine Factory one the oldest wine factory in Kakheti located at the historic Kvareli Castle wich history dates back to 1533 when Levan – the king of Kakheti – established a marani (wine cellar) in Kvareli, at the place of an old fortress. During wine tour in factory you will have a chance to taste different varieties of wines and discover a lot of interesting thing about wine making with excursion inside factory where you will see the process of wine makinig.

Gombori road is spectacular any time of year. Small idyllic villages, magnificent sceneries of Alazani valley and Caucasus Mountains, panoramic views, sheep flocks, ancient forests, beautiful meadows and sea of clouds are just a short list of what awaits you on this road. If Signagi-Bodbe-Kakheti wine tour is not interisteng for you we will take you to Borjomi - Uplistsikhe tour.

We can pick up from any hotel or address in Tbilisi 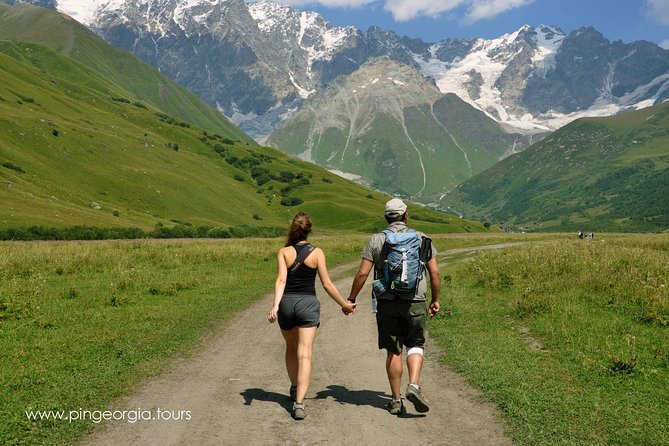 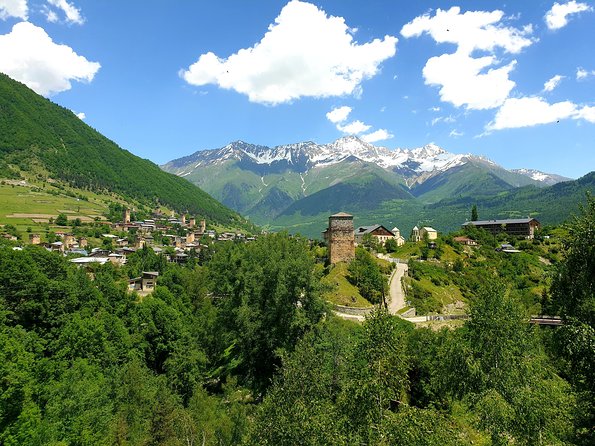 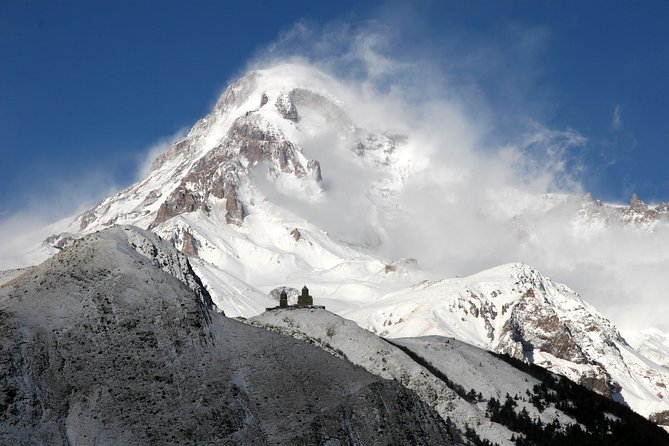 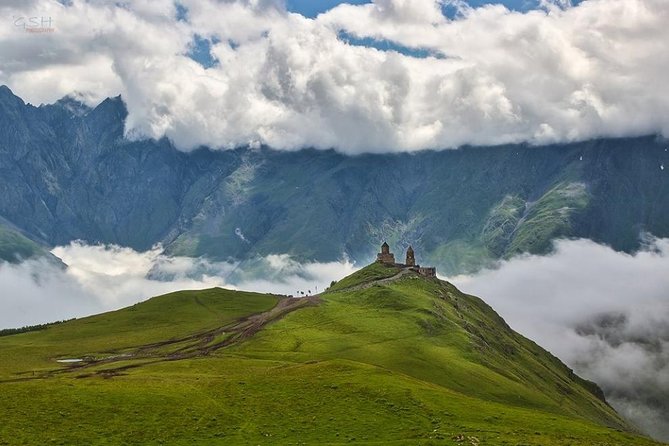 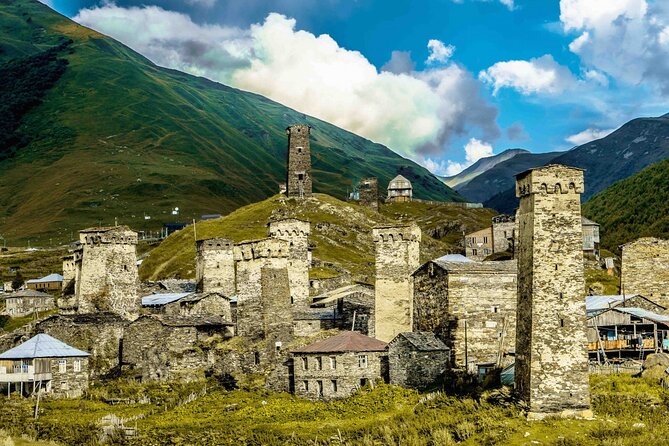 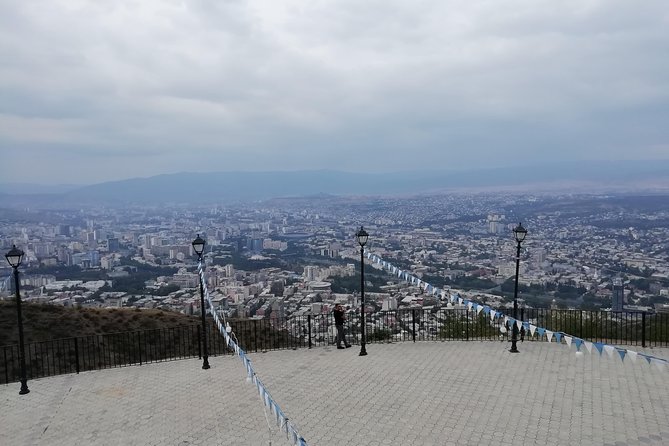 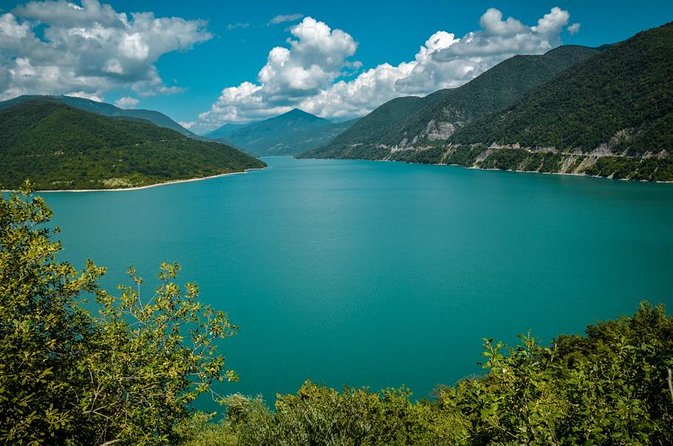