The most popular sightseeing route in Iceland, with impressive natural wonders and rich history.

Explore Iceland's oldest national park, and the founding site of the world's oldest parliament Alþingi. Here you can also see the rift between two tectonic plates, slowly moving apart and creating fissures in the lava fields.

Visit the magnificent waterfall of Gullfoss and marvel at the intense force of glacial meltwater falling down into the deep canyon of Hvitargljufur.

Geysir and Strokkur geothermal area. Strokkur is a geyser that is well known for it's very frequent eruptions, it erupts scalding hot water high into the air every 5-10 minutes.

Join an experienced guide on a 3-5 hour Northern Lights hunt in the Icelandic countryside.

Bus Stop #6 - Safnahúsið / Culture House. You must be ready for pickup 30 minutes before tour departure. 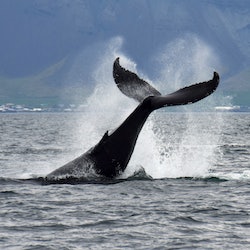